Standing in a pit in the red soil of a mountaintop forest in northern Mozambique, Dr Simon Willcock was dirty but very excited. “Undisturbed forest is incredibly rare,” he said. “That is why we scaled a 125-metre-tall cliff with a pickaxe.” Willcock, from Bangor University in Wales, knew of no other rainforest in Africa that scientists can confidently say has not been disturbed by humans. “It’s a unique site in Africa,” he said, plunging the axe down into the chest-deep hole with a whump.

Like a villain’s fortress in an old James Bond movie, Mount Lico rises vertically from the land around it, the ancient centre of a volcano with the forest nestled in its crater. It was discovered by Dr Julian Bayliss, who examined satellite imagery looking for an undisturbed tropical rainforest. When he spotted Lico on Google Earth, he said, the forest on top “was isolated and appeared totally undisturbed”. With a smile, he added: “That makes it very exciting.”

Bayliss, from Oxford Brookes University, had form: he is known for having found Mount Mabu, the largest rainforest in southern Africa, as well as a number of new species of butterflies and other creatures in the area since then.

Rainforests are the oldest living biomes on Earth and contain roughly half the known species of life. They also store more carbon for longer than any other living system. Some tropical rainforests date back to the dinosaur age, but virtually all show signs of past human activity. Bayliss wondered if there were mountaintop forests that might be untouched. He remembers thinking: “What would a forest like that look like?”

The answer was Lico. But the mountain’s formidable geography – its circling rock wall rises 700 metres above the plain – raised a whole new series of questions in terms of accessibility. Bayliss decided to focus on a “shorter” cliff of about 125 metres on one side, and to put together an expedition that would place scientists on the top of Lico via that vertical rock. But how would they be able to get up there?

It took two years to assemble the 28-person dream team of biologists, logistical crew, plant experts, and researchers for the first expedition that took place last month, led by Bayliss. Funded in part by Ranulph Fiennes’s Transglobe Expedition Trust, UK-based Biocensus, as well as the African Butterfly Research Institute, the project was an academic partnership between 13 universities, museums and research institutions on three continents.

From his home office in a converted chapel in the Welsh mountains, Bayliss contacted Jules Lines and Mike Robertson, professional climbers widely regarded as two of the best in the UK. Robertson famously ascended the Eiffel tower solo in protest against French oil company Total (and was subsequently arrested by the French police). Lines is known in climbing circles as The Dark Horse for his solo climbing without a rope.

The climbers scaled the rock face above the scientists’ basecamp and secured two ropes from the top all the way down to the bottom. Patiently they taught the scientists how to get up and down safely. “Learning to ascend a 125-metre cliff in the jungle is a lot to ask of people,” said Robertson, with a certain understatement, holding the safety line for 29-year-old Ana Gledis da Conceição Miranda, a Mozambican biologist working at the Pringle and EO Wilson laboratory.

Like most of the researchers, she struggled with the rope ascenders but didn’t give up. “These scientists are bloody gritty and determined; it’s impressive,” Roberston said.

Ferrying gear and supplies, the two climbers went up the ropes more than 40 times. Despite a medical emergency as a result of an extreme infection, everyone was able to get up and down the ropes safely. But the risk remained. “There is no rescue here,” said Lines, taking a break at the top. “We are it.”

Bayliss believes Lico could be one of the most pristine forests on Earth. Willcock and his colleague, Dr Phil Platts from the University of York, dug for two days to get to the forest bedrock to read the soil layers like a history book of Lico’s past. Every fire that ever burned here, many of the plants that grew, even millions of caterpillar droppings are all recorded in the soil. (Caterpillars are everywhere on Lico, so numerous in the trees above that their droppings fall like a dry, soft rain.)

“This forest provides a unique insight into the effects of climate change on forests over time,” said Platts, shovelling from the pit.

After 10 days of discovery, the team was back at base camp in Lico’s shadow. The hole in the forest had been refilled, the topsoil replaced, and Colin Congdon, a veteran lepidopterist, was comparing finds with Bayliss. Among their small translucent papers was Lico’s first confirmed new species: a butterfly. The scientists expect it will be far from the only one. There is a line-up of potential new species to be confirmed in the months to come, from snakes to frogs, toads, a snake-like amphibian called a caecilian, a shrew, a snub-nosed rodent, more butterflies, crabs and even a flowering plant. Cataloguing potential new fish species, Vanessa Muranga, a 27-year-old marine biologist from Mozambique’s Natural History Museum, had two wrapped in gauze in front of her. “It’s so exciting when you find something that might be new,” she said. 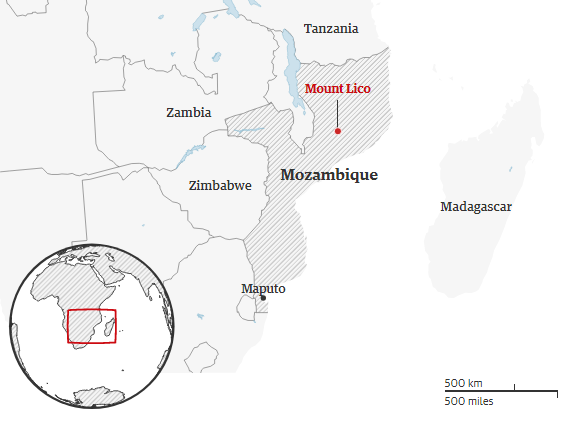 Lico contains other mysteries, too, including partly buried ancient pots that the team discovered near the source of the main stream. According to the local community, no one in memory or legend has ever been on top of the mountain. How did the pot-makers get up the sheer cliff? Was the land around Lico higher then? Could the soil analysis help date them? Anthropologists from Mozambique’s Natural History Museum are investigating.

From a South African herpetologist to a Brazilian biogeographer, a botanist with the Royal Botanic Gardens, Kew, to a mammal expert from Swaziland, the expedition to Lico represented a successful collaboration between local and international research institutions. This, according to Hermenegildo Matimele, curator of the National Herbarium of Mozambique in Maputo and Bayliss’s Mozambican counterpart on the expedition, was the greatest thing about it.

On the last night of the expedition, the scientists gathered around the base camp’s fire to share a celebratory drink. Perched on a packing crate with a big smile, Bayliss expressed satisfaction that everyone had made it off the mountain with their precious samples. And, he added with characteristic understatement, “it’s great, too, that nobody died”.

The expedition was funded by the TransGlobe Expedition Trust, Biocensus, The African Butterfly Research Institute, DMM Climbing, and Marmot tents.

The photojournalist’s travel was paid for by Alliance Earth.