The alarm blares loudly at 6:30 but I am usually already awake; excited to get out on the water. I grab my scuba gear, camera and research equipment, and hop onto my little motorbike. Somehow I’ve mastered the Indonesian tradition to fit as many items as possible onto a scooter, and ride off into town.

I’ve been a research assistant based in Labuan Bajo, the gateway town to Indonesia’s Komodo National Park, since August 2017 and have been volunteering for the Marine Megafauna Foundation for over a year now, spending last year in our  headquarters in Inhambane, Mozambique. This scientific fieldwork is part of one of the Marine Megafauna Foundation’s (MMF) long term research projects to study the manta ray population here.

The Marine Megafauna Foundation (MMF) is an international NGO that focuses on the conservation of giant ocean animals through pioneering research, education, and sustainable conservation solutions. Founded in 2009 by world renowned scientists Dr Andrea Marshall and Dr Simon Pierce, the MMF was originally based on the conservation and research of manta rays and whale sharks in Mozambique. Since then, the organization has expanded across the globe to a number of conservation hotspot areas like where I work; including the research and conservation of whale sharks, both species of manta ray, turtles, humpback whales, zebra sharks, dolphins, and other sharks and ray species. MMF focuses on three critical regions due to a combination of high biodiversity and human pressures: the Americas, the West Indian Ocean, and Southeast Asia. 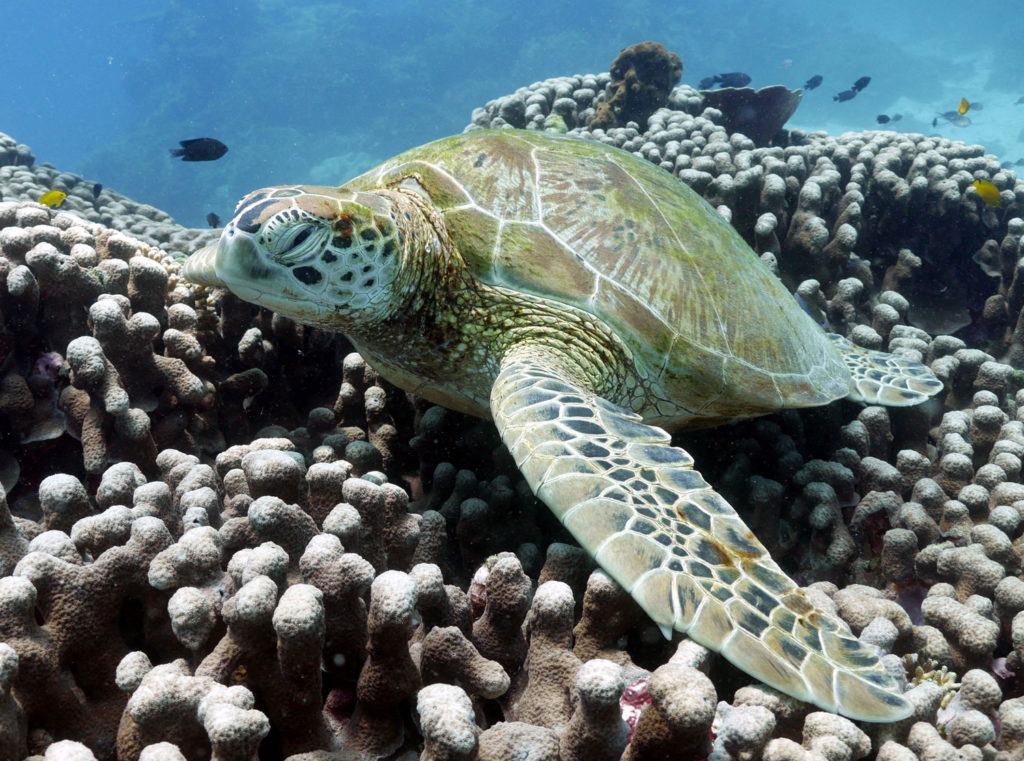 What drew me to volunteer for MMF is that their mission aligns completely with my interests in research, conservation and education. Research is important for gaining key information about the species, while conservation efforts aid towards protection of the species, and education works to spread awareness about what we can all do to help preserve a species and its underwater home.

As soon as we leave the Labuan Bajo harbour and enter into Komodo National Park it’s as if you’ve entered into another world. The boat is surrounded by a stunning scene of rugged mountainous islands with deep blue and turquoise waters. Every dive is an adventure because you never know what amazing animal you might see below the surface that day. For me, the most exciting animal to see is a manta ray. If you haven’t been lucky enough to see one before, imagine an enormous (8m wingspan for giant mantas!) animal shaped like a starship gliding effortlessly through the water. 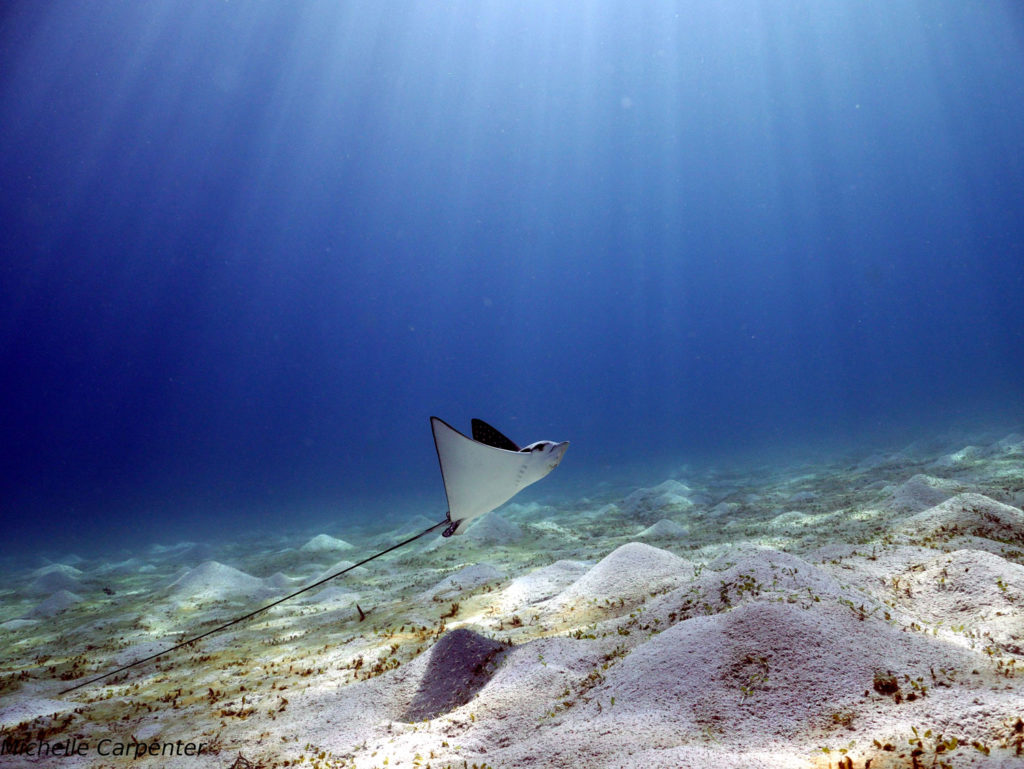 Manta rays can be as playful as dolphins but are also capable of extraordinary things like diving to depths of 1400 meters, traveling long distances frequently, and having special relationships with other ocean creatures like the cleaner fish that help remove parasites and clean their wounds. When you’re watching a manta ray sometimes they will come in for a closer look and just miss touching you by millimetres. In these moments it feels like total zen and sometimes it’s hard for me to remember that I need to be gathering data!

The day of fieldwork consists of three dives on sites known for frequent manta ray sightings because we want to encounter and photograph individual manta rays. Every manta ray possesses a unique spot patterning on their belly allowing us to identify them individually. Over time this photographic data gives us information about population numbers, distribution, and habitat use. In between dives I give presentations and nerd out about mantas and marine biology with the guests on board. 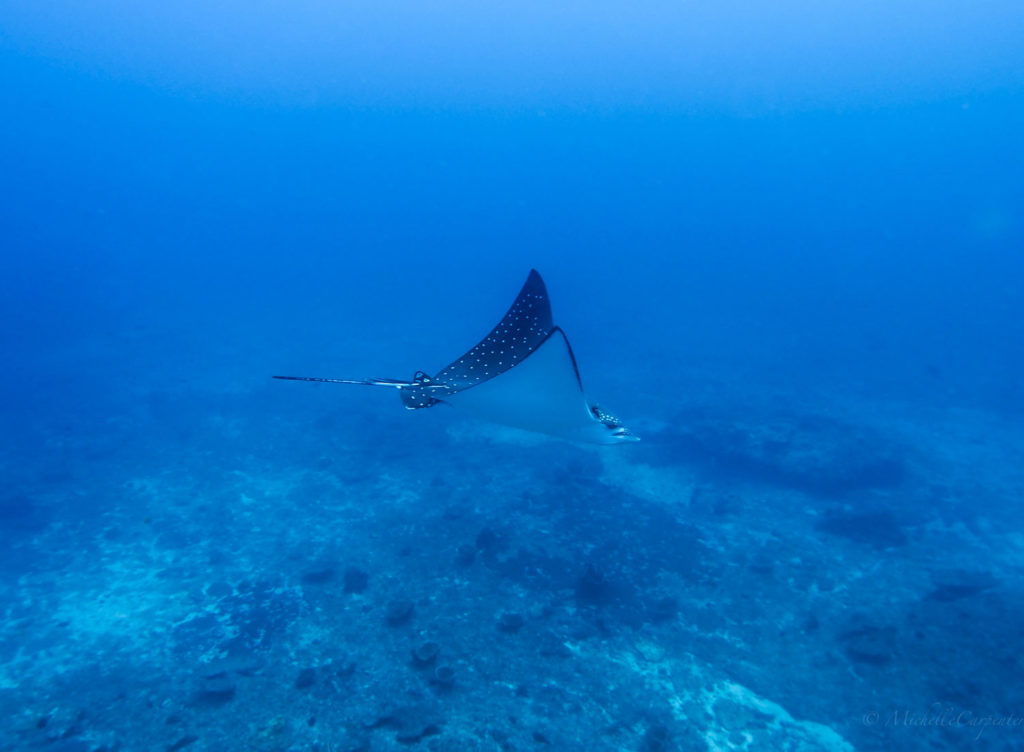 My parents and the films of David Attenborough fostered my love of nature and the ocean at an early age even though I grew up as a landlocked kid in upstate New York. As soon as I had the freedom to do so I immersed myself into the marine world, becoming scuba certified and attending university in Florida for marine biology. I spent my free time working in a variety of marine conservation groups like aquariums, mangrove research projects, coral reef monitoring in the South Pacific, and coral restoration in the Caribbean.

My experiences with these projects taught me some key truths about the current ocean revolution that is going on. First, we are living in a very critical but exciting time, facing a plethora of environmental disasters while simultaneously exploring the last unknown realm of the Earth. Research, conservation, and education are all equally important to bring about the change we need to prevent these disasters.

It is clear that we need to all work together to solve this crisis before it is too late.

‘Megafauna’ is a term used in science to signify large animals that typically have complex life histories. These impressive animals can be crucial for the ecosystems we depend on, for one example, sharks keep fish populations healthy by feeding on injured or diseased individuals. However, megafauna are also usually the first animals to be affected by human driven change, which we scientists call an “anthropogenic impact”. For instance, these animals are easily endangered by our pollution and overfishing. Manta rays are one of such species, but projects like MMF’s are continually increasing our knowledge about how to conserve them. 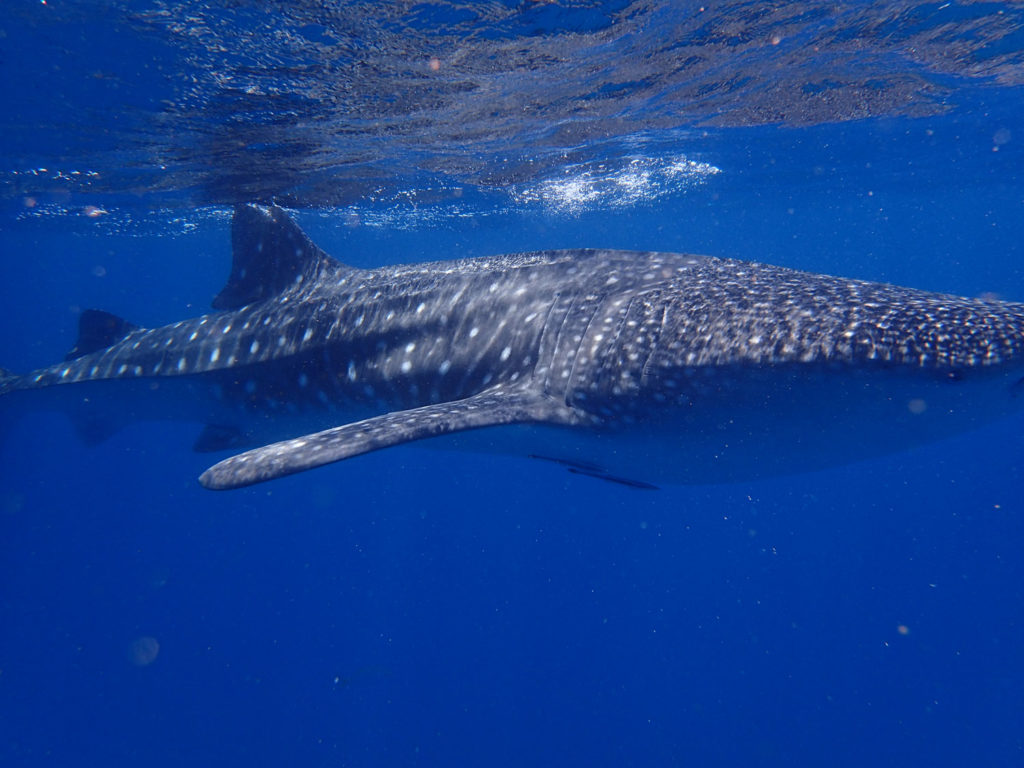 Manta rays are amazing. They are largest rays in the world but are filter feeders that eat zooplankton, the smallest marine animals. Before fifteen years ago little was known about mantas. They were thought to be solitary animals that did not travel very far and did not interact much but research has proven differently. In fact, it was only in 2009 that one of our founders, Andrea Marshall, discovered that they are more than one species.

There are multiple behaviours observed in manta rays that suggest a high level of intelligence, like cooperative feeding, breaching as a form of communication, and elaborate courtship displays. Check out this cool video of a ‘train’ of manta individuals that I recorded last month. To me behaviour is the most exciting area of research for manta rays, because it is so fascinating and we are just beginning to understand just how intelligent these animals are. 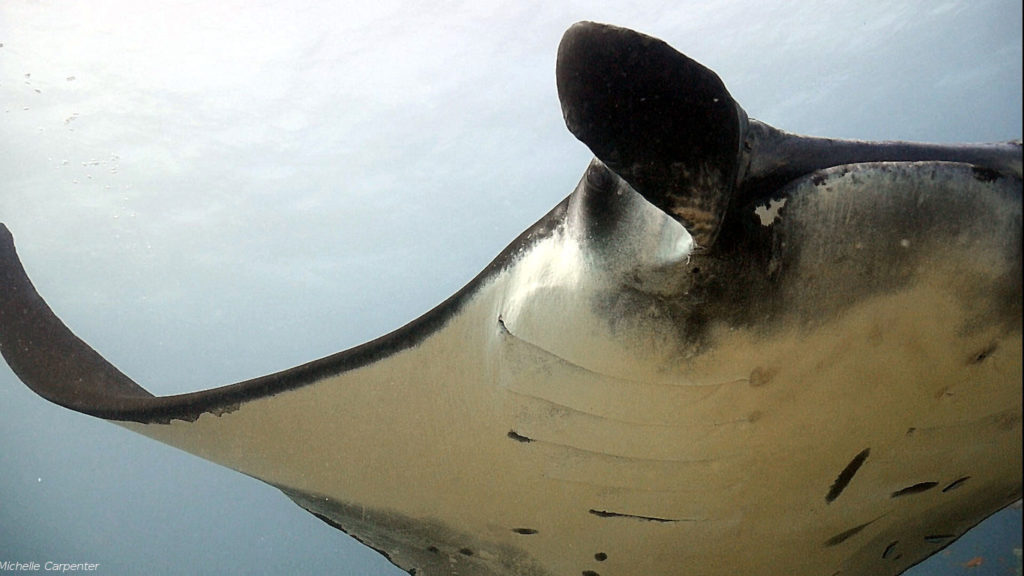 Both species of manta ray are currently listed as threatened on the IUCN red list. This means they are rare and becoming more so. The global decline of manta ray populations is due to a number of factors ranging from climate change, to coastal development, boat traffic and tiny micro plastics getting caught in their gills, according to a current MMF phd project by Elitza Germanov.

There is also direct and indirect fishing of manta rays. Mantas are being harvested globally for their gill rakers, an illegally trafficked body part like rhino horn.  I believe the public use of manta parts is mainly due to a lack of awareness, and this can be changed with education.  As for indirect fishing, there has been a global decline in fish stock and fishermen have been responding to this decrease in fish catch by using gill nets. These huge seine nets result in bycatch of not only manta rays but also sharks, turtles, dolphins, dugongs, and many other marine megafauna. MMF has been working with the communities in Mozambique to ban the gill nets and establish a network of locally managed marine protected zones.

Despite the many threats manta rays and marine megafauna face, they attract more tourist dollars every year. Manta rays are considered charismatic animals due to their alluring nature, and increased knowledge has resulted in an explosion of dive and snorkel tourism around the world. I dive with guests everyday who are truly concerned with the future of manta rays and marine life, and just like me they are excited about doing something to help them. Again, education is key because we must empower everyone to act quickly. 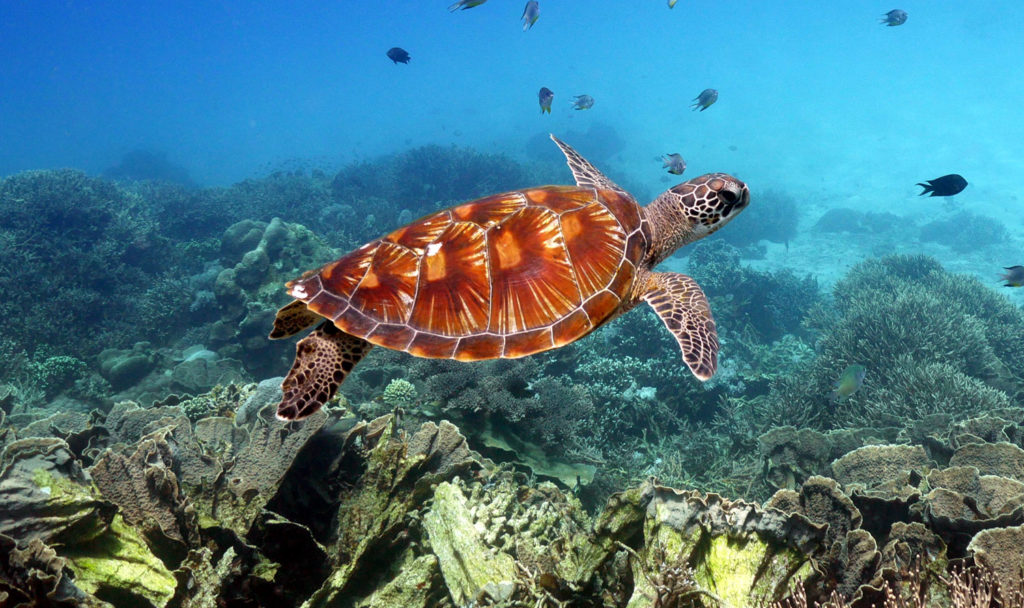 How you Can Help:

We are facing an ecological disaster and just as we work from the bottom up in our community projects, each of us must apply this philosophy to our everyday life and make conscious decisions to protect the environment like saying: no to single use plastics like plastic straws and plastic bags, and reducing your carbon footprint. If you do not want to indirectly support the bycatch of sharks and rays, then buy seafood from sustainable sources only, or do not eat it at all. Our everyday choices reflect what we support and we must take responsibility as individuals. We can help manta rays and the ocean no matter where we are in the world.

Together we can also empower each other to actively participate in manta research like mine even without a science background.  Citizen science is a powerful tool to study and conserve marine animal populations. Every single manta ray has a unique spot pattern on their belly, which allows us to identify them individually like a fingerprint for a human. Everyone can file their own pictures of mantas and join our global effort though Manta Matcher, the public database for manta ray encounters, made by WildBook. Join our worldwide effort today!

I was lucky enough to learn from Anna Flam when I was in Mozambique who taught me about the importance of photography for the research and conservation of megafauna. She is the global coordinator of Manta Matcher. Because of Manta Matcher, reef manta rays were found to travel more than was known before, for example, a 450 km distance between Komodo National Park and Nusa Penida. This landed reef manta rays on important conservation coalition groups like CITES, and gave them international protection in Indonesia. All because of citizen scientists like you!

Manta matcher continues to provide data for monitoring manta ray individuals, population estimates, and movements. When I go out for fieldwork, I am trying to both acquire the identification shots and encourage others to do the same, with the hopes that people will continue to submit their photos whenever they are able to swim with these majestic creatures.

In these times of environmental crisis, we must remember that we are all in this together. What could be more exciting than working towards a more just society that values our people, our animals and our planet in equal measure? One of the most important things we can do is to stay positive, we can fix it. Let’s work together and try our best not to let these serious obstacles bring us down.

I have learned so much and have been inspired by all types of different people in these last six years working in marine conservation, and we still have so many amazing animals to fight for. Every time I go out for fieldwork in places such as Komodo National Park I am reminded of the magical life that is still on this planet despite the damage we have done. There is a future for our ocean giants, and their survival depends on our actions. We have the responsibility and ability to make a difference, so get involved today!

Next year Michelle Carpenter will begin her Masters Degree by dissertation with a manta ray project. michelle.carpenter@marinemegafauna.org.

Michelle is from Binghamton New York and completed her degree in Marine Science at Eckerd College in St. Petersburg Florida. She has worked in marine conservation projects across the US, Caribbean, South Pacific, and Indian Ocean. She has been with the Marine Megafauna Foundation for over a year and plans to begin a masters project next year.